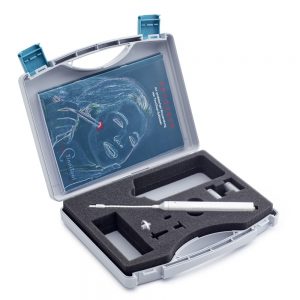 DOES IT WHISTLE, RING, ROAR OR DRONE IN YOUR EARS?

The treatment with the EarLaser4 is completely safe and painless. The laser beam even penetrates the deeper subcutaneous layers and works as curative bio-stimulation directly on the metabolism in the connective tissue. This leads to rapid regeneration of the hearing cells, stimulation of the immune system, acceleration of cell division and activation of specific defensive molecules. More than 40’000 affected persons have already been successfully treated with this system.

Many disorders arise through a deficiency of ATP (adenosine triphosphate), the cell energy necessary for life. ATP is a key substance in our cells. The mitochondria (cell power-plants) provide ATP energy for the cell processes through glucose combustion. ATP deficiency leads to cell damage and destruction in the end, but concentrated EarLaser4 light (660 nm wavelength) stimulates glucose combustion to improve the ATP supply. The EarLaser4 therapy can therefore accelerate the regeneration of damaged cells in the auditory system.

The principle of EarLaser4 is to project the needed energy concentratedly and precisely on the ailing area by means of an elaborate fiberglass cable. With the optimized EarLaser4; we set new standards regarding product quality and ease of handling. Due to the perfect positioning of the EarTool the laser beam can reach the inner ear more exactly.

The laser treatment underwent successful long-term testing in hospitals and in physician practices. It was submitted to extensive medical tests and proven scientifically by various medical studies. The safety and effect of the EarLaser4 were attested and certified medically.

Suitable with symptoms like:
– Acute and chronic tinnitus since 3 years
– Partial deafness due to tinnitus
– Morbus Ménière (dizziness)
– Acute hearing loss and hearing distortion
– Consequences of a middle ear inflammation
– Circulatory problem in the inner ear

The MedicLaser in conjunction with the EarTool can be used for the following applications:

There is an extensive instruction manual enclosed, which explains all treatment methods simply and in detail.

♦ The treatment time may be extended, depending on the degree of severity.

Our products and our business are subject to the most scrupulous ISO 13485 quality checks. Both have been certified in accordance with the strict guidelines for medical devices. We have CE marking and operate in accordance with EU guidelines 93/42/EWG. Our work is supervised by the Swiss accreditation body and is therefore directly affiliated to the European Accreditation System.
TinniTool ProfiLaser meets requirements as per:

Evaluation of the customer satisfaction among users of the TinniTool MedicLaser

(You will be redirected into mymuna.com)